Recent research conducted by Sokanu* aimed to answer a simple question: who are the happiest workers in the United States? We’ll give you a hint the top two are not part of the contiguous states. That’s right, Hawaii and Alaska took the number one and number two spots respectively. Want to find out how everyone else did? Check out the results in the infographic below. 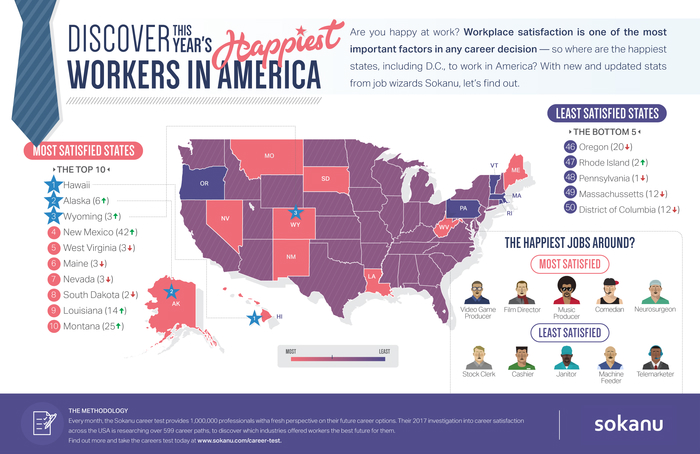 Sokanu’s blog reports that it is estimated that the average person will spend one third of their life working. That’s why it’s so important to make sure that you are happy at work. The survey asked how satisfied people were with their careers and looked at where people were the happiest.

The survey also found that the type of career and the path of study pursued by workers had a large impact on their job satisfaction. Additionally, the survey determined that where in the country a worker lives and works also makes a big difference.

Hawaii had the happiest workforce last year as well. Alaska moved up six places over last year’s survey, and Wyoming moved up 3 places. The East Coast holds many of the unhappiest workers with Rhode Island, Pennsylvania, and Massachusetts scoring the 47th, 48th, and 49th places respectively. Washington D.C. fell 12 places from last year to the very bottom.

The study found that creativity was a critical factor when it comes to job satisfaction. Video Game Producer, Film Director, Music Producer, and Comedian were labelled as the happiest jobs in the country, along with Neurosurgeon. Service-based, location-dependent jobs such as Telemarketer, Store Clerk, Cashier, Janitor, and Machine Feeder were rated as the nation’s unhappiest jobs, signalling that passion-based creative jobs offer more job satisfaction than service-based jobs.

*Sokanu is a career test and platform designed to measure people’s intrinsics and match them to careers.