The history of filing systems evolved from bundled paperwork in the early 1800s to the development of the lateral file in 1998.

Filing cabinets were only developed in the U.S. in the mid-1800s and revolutionized business development. Prior to the manufacture of filing drawer systems, paperwork was filed on shelves, in desk drawers, and in boxes. Important paperwork would often be gathered together, bound in some manner and stored in boxes or on shelves.

In the early 1800s, shelves and dividers were built inside wooden safes so they could accommodate ledgers and stacks of papers as well as funds and safeguard them from theft. Bundling paperwork proved less than adequate when a person wanted quick access to specific pieces of information.

A variety of filing cabinets began to be crafted in the mid-1800s, steadily evolving to meet the needs of newly burgeoning businesses. Letter cabinets had flat file drawers with alphabetical dividers and a metal device meant to hold the papers in place.

The Amberg Peerless Cabinet Letter File debuted in 1868, and by 1881 over 1000 firms were using its cabinets. Document filing cabinets were advertised “for folded legal documents” and proved popular with lawyers, railroads and others (at least according to period advertisements), because it was standard business practice at that time to fold such documents twice before filing.

Pigeon Hole cabinets, right, featured numerous styles of filing systems. The precursor to our modern carousel storage systems combined pigeon hole, flat drawer files, bookcases and a revolving stand for easy access. Pigeon-hole files had doors. To open a door, one lifted its handle and slid the door forward, which pushed all doors above it upward also.

Two major changes occurred in the design of files during the late 1800s: Filing systems began to be designed out of metal. So far, the earliest ads found for these are dated 1886, though product could have been on the market for a few years before that.

Then, the late 1890s witnessed the mass marketing of Sectional Filing Cabinets (a.k.a. Elastic or Expansion Filing Cabinet) that the customer could assemble from modules, rearrange and expand as the need arose. The earliest advertisement uncovered for this type is from 1897. 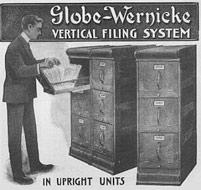 A complete metamorphosis in concepts of filing and about filing cabinets occurred with the introduction of the lateral file which was first invented by Edwin G. Seibels in 1898.   His creation revolutionized record-keeping in all venues of society. Until then, businesses had folded papers in envelopes and placed them in pigeon-hole or drawer file drawers. The genius of Seibel was in recognizing that finding and opening envelopes was wasteful and that folding wasn’t even necessary if the papers could be kept in large envelopes standing on end vertically in each filing cabinet drawer.

Siebels acted on his idea, presented specifications to Globe-Wernicke Company of Cincinnati on his filing system and had them make five wooden filing boxes before applying for a patent. His patent application was turned down because his sample was more of an idea than a product invention.

Siebels later explained, “It was pointed out that by simply varying the size, a filing box could be made which would not infringe my patent. Unfortunately, I overlooked the part played in setting the envelopes upright, and separating them with guide cards. This device, of course, could have been patented.” Decades later Globe-Wernicke presented Siebels with a bronze plaque of recognition for what they termed his “pioneering work” in developing the filing cabinet concept.